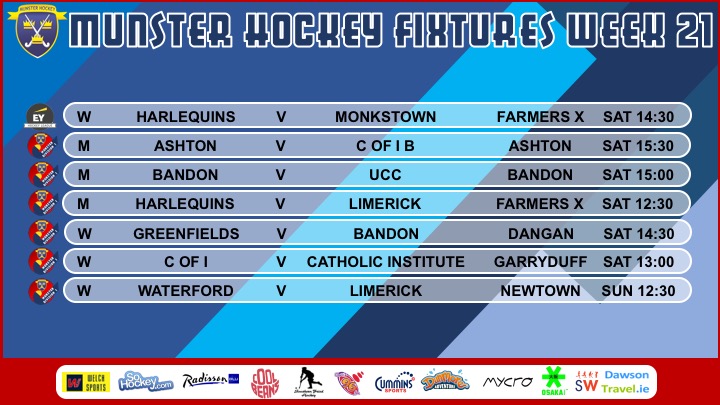 Week 21 sees Bandon women attempt to make the final if the IHT for the second year in a row. Having won the title last year they face tough competition in the semi final as they travel to Greenfields.

In the IHL Harlequins host 2nd placed Monkstown hoping to close the gap and confirm qualification for the Champions Trophy.

In Divison 1 C of I and Catholic Institute meet in what is almost certainly the race for second place. C of I’s draw last week and UCC’s win over Inst means the league is the students to lose. The battle at the bottom of the table has taken a few twists in the last few weeks and it could happen again on Sunday as Limerick travel to Waterford. Limerick sit 3 points behind currently so a win would really open things up going into the last few matches.

On the mens side a win for Bandon tomorrow over UCC will seal the title with 3 games to spare. Ashton host an in form C of I B. A win in the the IJC semi final over Glenanne and a win over league leaders Bandon in the last week means Ashton will have to be at their very best to get anything. Harlequins host Limerick in the other game.