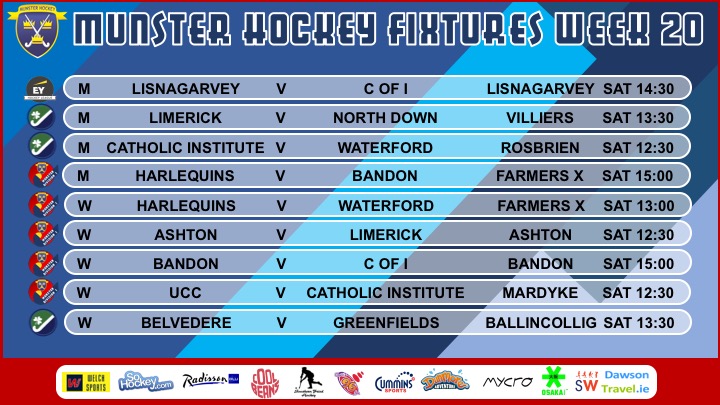 Week 20 is a busy weekend both domestically and nationally with 6 Munster sides vying for places in national finals.

C of I travel to Lisnagarvey on the back of a disappointing performance against Railway Union. That loss means they go to Garvey with a different mindset as the battle to hold onto a top 4 spot gets tougher.

Limerick host North Down in the semi final of the IHT. Although results have been up and down this year for Limerick this is a fantastic opportunity to make a national final. North Down defeated a depleted Ashton side in the quarter final and will be favourites but Limerick will hope to use home advantage to cause an upset.

In the IHC Munster are guaranteed a finalist as Catholic Institute host Waterford in the semi final. Bray or Portrane await the victors in the final.

In men’s Division 1 Bandon can move to within 1 win of the league title if they beat Harlequins tomorrow. They still have a 100% record in the league.

UCC and Catholic Institute meet for the second time in a week but this time in the league. UCC edged the cup match 3-2 and we expect tomorrow’s game to be as close. Bandon host a C of I team that will be looking to capitalise on any slip ups from the game in the Mardyke but Bandon will be no push over having pushed all the top sides close this year. In the final league game Ashton host Limerick with both sides fighting for points at the other end of the table. With no IHL game this weekend Harlequins women host Waterford in the semi final of the Munster Senior Cup.

Division 1B form team Belvedere will be hoping to make the IHC final on the women’s side on Saturday. They host Greenfields second team in the semi final.

On Sunday Bandon B and C of I B have tough away trips to Dublin in the semi final of the Junior Cup. Heres hoping for an all Munster final.