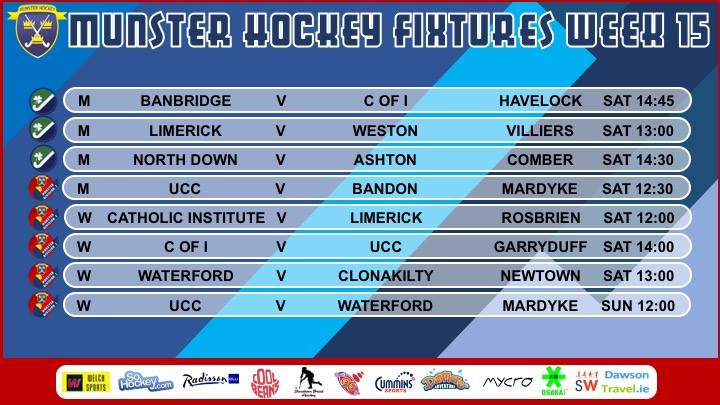 Week 15 sees plenty of cup action both nationally and domestically. In the Irish Senior Cup C of I make the same trip as last weekend to face Banbridge. A narrow loss last week suggests another close game is on the cards.

In the men’s Irish Hockey Trophy Ashton make the trip to North Down while Limerick host Weston. Both sides have had contrasting fortunes since the Christmas break with Ashton winning two from two while Limerick have come out the wrong end of some close games. Meanwhile in Munster Division 1 UCC will be hoping to bounce back after last minute defeat last weekend as they host runaway league leaders Bandon.

In the women’s Munster Senior Cup Harlequins secured their spot in the semi final with a 3-0 win over Ashton on Thursday night. Catholic Institute host near neighbours Limerick in Rosbrien, C of I and UCC meet in Garryduff while Waterford host Clonakilty. On Sunday Waterford travel to UCC in a back match in the league.