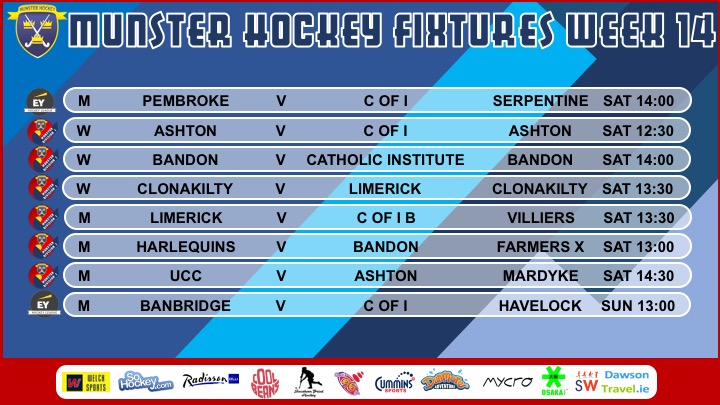 Week 14 and a double away game weekend for C of I in the EY IHL. They first travel to Pembroke Wanderers on Saturday and then head further North to Banbridge. 6 points is a big ask but if it were to happen it would put them top of the table on their own.

In Men’s Division 1 Limerick were unlucky to come away with nothing from Ashton last week and will be hoping home comforts and the fact that C of I firsts are playing will give then the edge over their seconds. The Senior Cup first round also tips off. Ashton travel to UCC and Harlequins host Bandon.

In Women’s Division 1 C of I will be looking to bounce back after defeat in the IHT last weekend with their trip to Ashton. Ashton themselves will be looking to turn things around after a heavy defeat to UCC. Institute and Bandon meet in a game that has gone both ways in recent times. Indeed the last time the sides met in Bandon they knocked Institute out of the IHT on their way to the final. Institute are however unbeaten this year and will be hoping to keep pace with UCC and C of I. In the last game Clonakilty will be hoping to move above Ashton while Limerick will be hoping to lift themselves off the bottom of the league.