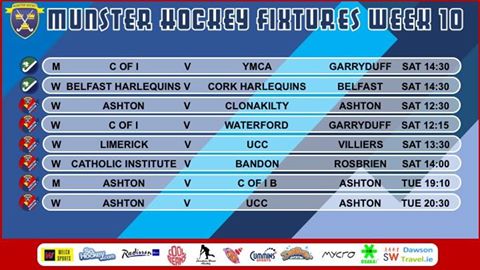 In week 10 the IHL takes a break as the Irish Senior Cup second round takes place. Both C of I and Quins will be favourites to progress as they play YMCA and Belfast Harlequins respectfully.

In women’s division 1 the top 3 have created a bit of a gap to the rest of the chasing pack. C of I host Waterford hoping to close the gap on Catholic Institute, as will UCC who travel to Limerick. Ashtonand Clonakilty will both be hoping to break from the rest in the other game.

Catholic Institute and Bandon face each other in the other game but this is the first round of the Munster Senior Cup and not the league.

There is a double header in Ashton on Tuesday as the men play C of I B in the semi final of the Peard Cup and the women play UCC in the league.