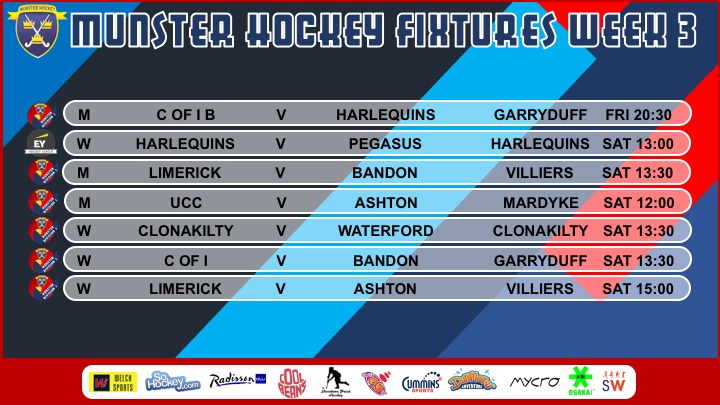 There is a break in the men’s EY IHL this weekend with the EHL taking place in Banbridge Hockey Club. However high flying Cork Harlequins have their first home match on the women’s side when they host Pegasus on Saturday. Quins are 3 from 3 on their travels with 7 on their panel already off the mark this year.

In Munster men’s division 1 C of I B host Harlequins on Friday evening. Having dispatched of champions UCC last weekend C of I B look like genuine title contenders this year. Quins on the other hand pushed Bandon close but ended up losing by a single strike. Bandon Hockey Club travel toLimerick Hockey Club who will be looking to bounce back from defeat at home to Ashton Hockey Club last weekend. Ashton themselves are away again this week taking on the UCC in the Mardyke in what could be a very close encounter.

Last week was a clear indication of just how close women’s division 1 is going to be. 4 score draws in the 5 matches means all but Clonakilty Hockey Club are off the mark. They pushed Bandon close last weekend and will welcome home comforts as they host Waterford Hockey Club. Waterford held Ashton in a 2-2 draw last weekend and will hope to go one better this weekend. Ashton travel to Limerick in a tie Limerick hold the upper hand on in recent games. They were impressive last weekend and snatched a draw at the death against neighbours Catholic Institute Ladies Hockey. The last tie of the weekend sees Bandon and C of I women lock horns in Garryduff. Bandon were the sole victors last weekend coming from behind against Clon. C of I also made an impressive start to the season with a draw against UCC. Both these teams will hope to be in the mix come the end of the season and 3 points on Saturday would be a clear statement of that intent.