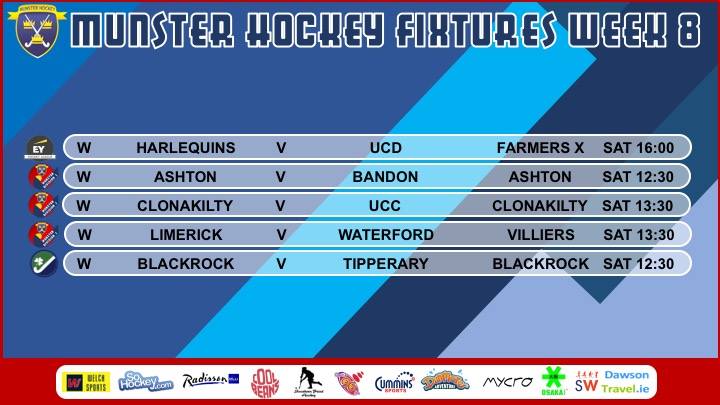 Week 8 sees the men’s leagues take a break as the U16 and U18 Interpros takes place in Ulster. Best of luck to both Munster sides.

After a narrow defeat last week, Cork Harlequins welcome 2nd place side UCD Ladies Hockey Club to Farmer’s Cross. Quins will be buoyed by the inclusion of 5 of their squad in Graham Shaw’s extended training panel this week in the lead up to World League 2. UCD have the same number represented meaning a total of 10 internationals will be on show.

In Munster Division 1 Ashton Hockey Club host Bandon Hockey Club in a tie that has been closely matched in the last few years. They will also face each other the week after in Bandon as they have been drawn against each other in the Irish Hockey Trophy. UCC LHC travel to Clonakilty Hockey Club for the first time having had a solid start to the season. Clon have also picked up some vital points in whats become a crowded mid table. The last game sees Waterford Hockey Club travel to Limerick Hockey Club with both clubs looking for valuable points.

In the Irish Hockey Challenge first round, defending champions Blackrock Hockey Club host Tipperary. This will be their second meeting this season with Tipp edging the last game 1-0.